Ted’s List of Places to Eat in Isla Vista 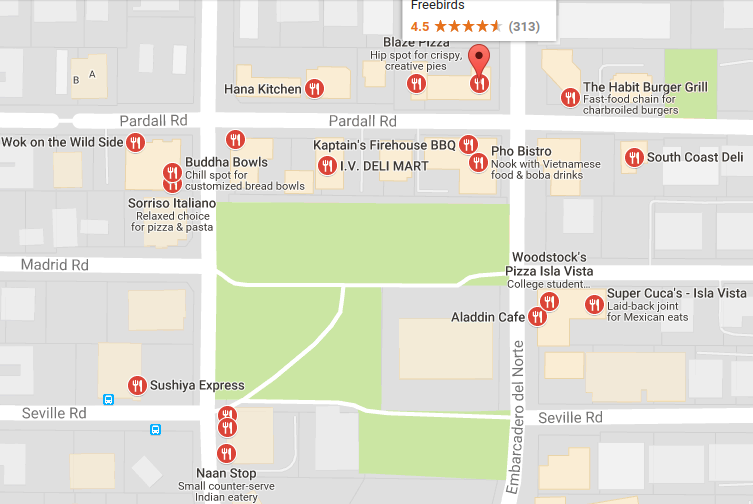 In my first year at UCSB I gained thirty pounds, lurching from 130 to 160. Despite jogging twenty miles a week and sampling gym machines at UCSB’s Rec-Center, I couldn’t escape the ‘Freshman Fifteen.’ It caught me twice! Even when I ran marathons up the mountains to the north, I couldn’t shake the weight.

Why? Well, when you run, you’ve gotta eat, and Isla Vista’s got hungry people covered. Today let’s look at some dining options near campus.

First, I’m writing for Tropicana del Norte, so let’s discuss their cafeteria. Food is catered by College Fresh, and I can state without bias I’m looking forward to eating there again. When I moved into an apartment for the 2016-17 school year I missed the privilege of having teams of caterers make food for me. The menu changes daily, and if one day nothing appeals to you, you can walk to the back to order hamburgers and the like (or eggs made-to-order in the morning). Grab some toppings and condiments from the sandwich-making materials and you’ve got a meal. I wouldn’t eat here three meals a day seven days a week, but as a staple food-source for college students, Tropicana knows what they’re doing.

Second, let’s review UCSB’s dining halls for anyone who has a dining plan. The dining hall closest to Tropicana Del Norte is probably Carrillo, in Manzanita Village. Carrillo has the widest variety and best desserts, but only soft-serve ice-cream. Ortega and De La Guerra both have hard, scoopable ice-cream (DLG a wider selection). Ortega and DLG are quite close to one another near the Old Little Theater, and of the two I prefer DLG. Ortega offers sushi, but DLG has a build-a-burrito bar. However, Ortega occasionally has sundae bars, chili bars, or other special events I’d recommend over DLG. Check the schedule once school starts. Ortega is also the only dining hall which lets you take a box of food off the premises. (There’s another dining hall, Portola, but I’ve never been there. It’s built into off-campus student housing.)

On campus there are two Subways, a Panda Express, a Jamba Juice, and other assorted eateries, mostly in the University Center (U-Cen). I enjoy Santorini Island Grill, which serves gyros, spanakopita, shawarma, and baklava. I also enjoy the bulk candy bins at the U-Cen student store (not the book-store, but nearby), where you can satisfy your sweet-tooth and pay by the pound.

Anyone who’s been to UCSB before is waiting for me to mention FreeBirds (or, uh, FreeB!rds) World Burrito, which is near Tropicana del Norte on Pardall Road. Many campuses claim to have the first FreeB!rds, but only UCSB touts that title legitimately. FreeB!irds offers burritos, monster burritos, quesadillas, quesaritos (burritos made using quesadillas), tacos, and nachos. Opinion differs on whether it’s comparable to Chipotle, but the nearest Chipotle is miles away and FreeB!irds gives you more food per dollar, I think. Generally a monster burrito will feed a student for a day or two, and I’d recommend splitting the nachos with a friend.

Near FreeB!rds, just outside of school, there’s a third Subway, a Habit burger grill, and a Starbucks. Down Pardall there’s SilverGreens for healthy burgers and vegetarian-friendly fare, and Buddha Bowls for bread-bowls filled with soup or salad. When they scoop bread to make the bowl, they give you the scoop as garlic bread!

Quite a few restaurants serve boba, or bubble-tea. If you’ve never had them before, bobas (bobii?) are chewy little Taiwanese tapioca balls submerged in a drink. You slurp them up with a wide straw. Some people love ‘em, some people hate ‘em. Personally, I love ‘em. Maybe it’s a Californian thing, or a Millennial thing, like avocados.

Anyway, I first had boba at Hana Kitchen. Hana Kitchen sells meat-and-vegetable bowls with rice; I prefer the vegan option, which is soy-based, as the larger sizes are a bit too much meat for me to eat in one sitting. They also have interesting tacos, and taco sales on Tuesdays. Hana Kitchen sells boba and other drink-jellies in a variety of beverages like teas, milk teas, and ice-slushes. The Pho Bistro sells boba in more exotic flavors like taro root, alongside an extensive menu of vietnamese soups and noodles. My favorite restaurant name is Naan Stop, an Indian counter-service restaurant which also serves boba. True to their name, they’ve got great naan.

There’s no shortage of pizza in Isla Vista. The most famous pizza in IV would either be Woodstock’s (which also has a kiosk on campus) or Pizza-My-Heart. Pizza-My-Heart serves pizza by the slice, while Woodstock’s serves mostly whole pizzas and has event nights, like trivia night. Blaze Pizza on Pardall will build your pizza in front of you. If you’d like a more standard experience, there’s a Domino’s near IV Market next to a sushi place, Sushiya.

Finally, desserts. The well-named IV Drip sells coffee and sandwiches, but is most well-known for its ice-cream. The Equilibrium Cafe sells crepes of all kinds. Next to Domino’s, Sweet Alley sells frozen yogurt and candy by weight.

This isn’t an exhaustive list of the restaurants in IV, but I hope it helps you find places to eat with your friends in your first year at Isla Vista. There’s enough variety here for everyone to find something they enjoy. If you see me stocking up on food after a long run in preparation for an exhausted hibernation, say hi, and tell me your favorite place to eat! Did I leave it off my list?